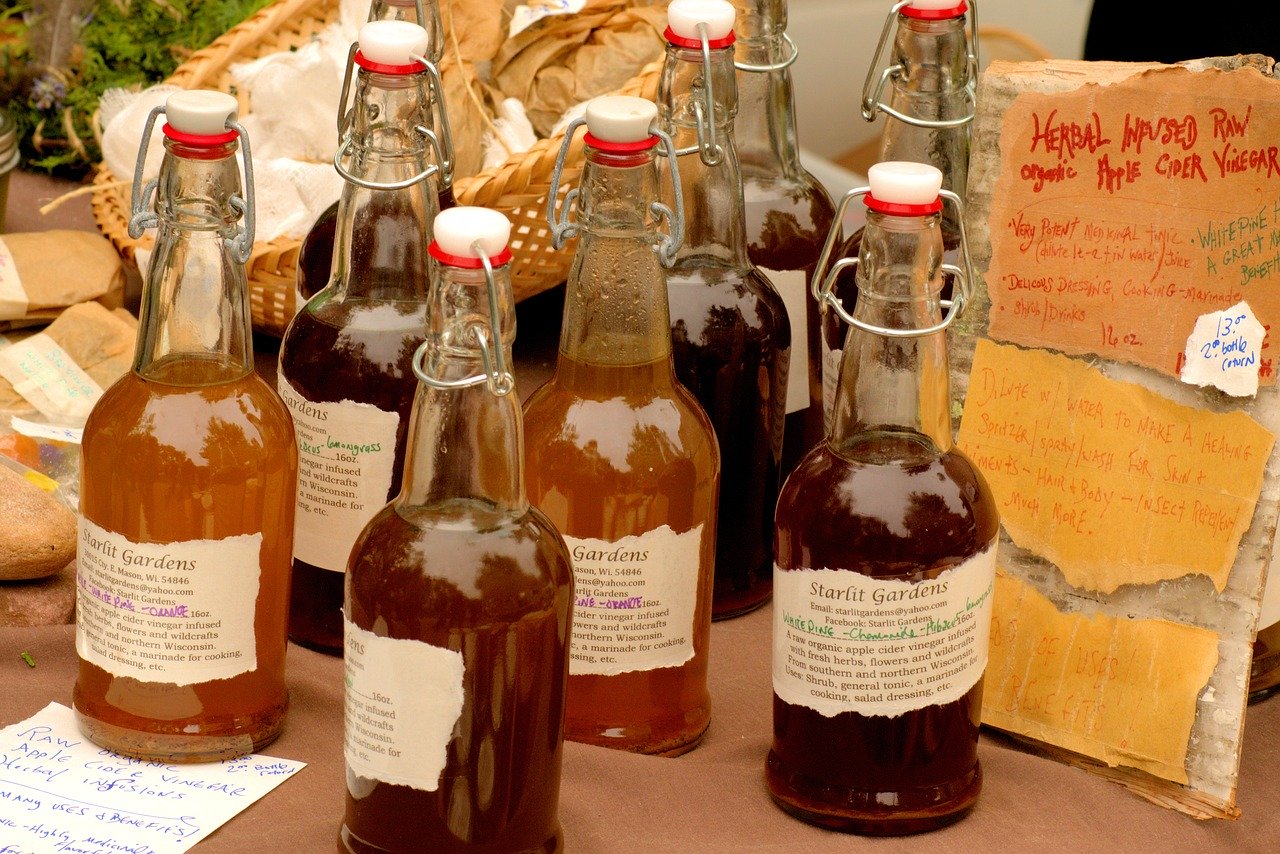 Vinegars traditionally are fermented products and used for food flavouring and as a preservative. There are a variety of different vinegar products found in many cultures around the world with the earliest known vinegar dating back to more than 10, 000 years.

Recently, science has started to study these fermented products and initial indications are that traditionally fermented vinegars such as apple cider vinegar may hold various potential health benefits.

The therapeutic effect of vinegars such as apple cider vinegar is thought to be due to various potent bioactive compounds, including:

What Are Some Of The Health Benefits Research Has Uncovered For Vinegar?

– Antimicrobial
Vinegar has been used to treat nail fungal infections, head lice, warts and ear infections. The organic acids such as acetic acid found in vinegar passes through the cell membrane of the pathogenic organisation resulting in it’s death.

– Antioxidant
The bioactive compounds in vinegar such as the polyphenols may help defend body cells against oxidative stress due to their antioxidant properties.

– Anti-diabetic
In both animal and human studies, vinegar with an acetic acid concentration of 2% has been shown to help modulate blood sugar levels after eating a meal. This may be of benefit to people with unstabilised blood sugar levels.

– Anti-tumor
Polyphenols contained in vinegar have been shown in cell studies, to inhibit certain cancer cell lines including lung carcinoma, breast adenocarcinoma, bladder carcinoma and prostate carcinoma. In Japan the sugar cane produced vinegar known as Kibizu was shown to be associated with a protection effect with a decreased risk of esophageal cancer in humans.

– Anti-obesity
Vinegar may help reduce the glycemic effect of food (the impact of food on blood sugars) and improve a person’s feeling of fullness, resulting in an overall reduction in how much food a person eats. Studies have found that as acetic acid concentrations in the vinegar increase so did a person’s feeling of fullness. Small clinical trials have also demonstrated that people consuming vinegar compared to a placebo lost more weight.

– Prevention of Cardiovascular Diseases
Oxidation of low density lipoproteins (LDL) is part of the cascade of events thought to initiate and progress atherosclerosis. Chlorogenic acid is present in high levels in apple cider vinegar and is thought to inhibit the oxidation of LDL.

What Are The Different Types Of Vinegars?

There are many types of vinegars including Apple Cider, Balsamic, Cane, Coconut, Distilled, Fruit, Kombucha, Malt, Potato, Red Wine, Rice, Tarragon and White wine. Where possible, choose vinegars that have been produced using traditional fermentation processes and contains the “mother” which develops during the fermentation process.

Although in general consuming a fermented vinegar such as apple cider vinegar is safe and may have health benefits when incorporated in overall changes to your diet, there can be some low risk side effects that need to be considered, such as:

1. Vinegar may weaken dental enamel due to the acetic acid, especially if taken undiluted.

2. In certain people with health conditions such as gastroparesis, the consumption of vinegar in large doses may worsen the condition due to the fact that vinegar can delay food leaving the stomach.

3. Vinegars that have been shown to help control blood sugar and lower blood pressure may interact with diabetic and hypertension medications if consumed in large doses.

This factsheet is for general information only. Please contact me to discuss your individual needs.